Windows Defender or Malwarebytes, which antivirus software is a better option in 2020?

We have put together this detailed Windows Defender versus Malwarebytes comparison to help you make an informed decision.

These days, it is riskier than ever to go online without excellent antivirus protection. More people are using the internet than ever before, which means there is an increased threat from hackers who are continually surfacing new malware and coming up with clever ways to steal your financial data and personal information.

In 2018 alone, over 10 billion malware attacks were recorded worldwide. Also, over 1.5 million new phishing sites are created every single month. Ransomware attacks have also increased by over 97% over the past two years. These numbers are alarming, and they are expected to go even higher as time goes on.

So, it’s evident that you can no longer count on flimsy protection offered by free or low-end antivirus programs. Instead, getting a full-blown premium security software is the way to go. But we know that finding the right antivirus software can be difficult.

(All the best security products examined)

During the past few months, we examined and reviewed over 50 antivirus suites from the biggest names in cybersecurity. We did this so you can confidently choose the best antivirus software to protect yourself and those you love.
Overall, Bitdefender is our #1 antivirus software for 2020, because of its excellent, flawless performance in all the recent independent lab evaluations we considered, particularly those conducted by AV-Test and AV-Comparatives.
Right now, we think that Bitdefender Total Security 2020 (currently at 60% off) is the best antivirus package available in the market. Apart from providing excellent anti-malware protection, it offers all the advanced premium features and utilities that must be there in a high-end package -- and best of all, it offers excellent value for money. You can protect up to five devices (PCs, Macs, or smartphones) with just one subscription.
If you need protection for more than five devices, we highly recommend Bitdefender Family Pack 2020. It will cover all the internet-capable devices in your household with the Total Security suite, so your family will be protected no matter what goes wrong.

In this ultimate guide, we’ll compare Windows Defender and Malwarebytes to see which software is a better choice. We’ll see how both software compare in terms of features, anti-malware security, impact on system performance, and more.

In a rush? Take a look at the quick rundown below for a quick view of the battle.

A Quick Rundown of Winners in Each Category

1. Features
Winner: None. Many advanced security-related features and utilities are missing from both software.

3. System Performance
Winner: None. Both Windows Defender and Malwarebytes need to improve their performance scores.

5. Pricing
Winner: N/A. Windows Defender is free, while Malwarebytes offers several products, including a freeware. There isn’t a real comparison between both software in this category.

Our recommendations: If you want to get the highest level of security and performance, there's no better choice than Bitdefender, which protects over 500 million devices worldwide.
We have reviewed, ranked, and rated all the best antivirus software products out there, and we think that Bitdefender Total Security 2020 (currently at 50% off) is the best antivirus package you can buy right now. You can protect up to five devices (PCs, Macs, or smartphones) with just a single subscription of this suite.
If you need protection for more than five devices, Bitdefender Family Pack 2020 is the best option for you.
Looking for Mac-specific protection? Check out Bitdefender Antivirus for Mac for complete peace of mind.

Now, let’s dig into the details …

Most modern antivirus software provide you with excellent features and utilities that promote extra value and utility beyond just anti-malware protection.

First, let’s examine what features are included in Windows Defender.

Windows Defender Security Centre (also called Windows Defender) is the default antivirus product that comes with almost all versions of the Windows operating system. You can’t totally uninstall this software, unfortunately, but it automatically turns off when you install a third-party antivirus program.

The software comes with a comprehensive malware scanner that gets updated regularly with new definitions, as well as a firewall that inspects all the data flowing in and out of your network.

The Find my Device function that lets you locate your PC when it gets lost or stolen is also part of the software. This utility enables you to erase or lock your system if you fear that your personal information is in danger of being stolen.

A suite of parental controls also comes built-in with Windows Defender. These features let you block your kids from accessing certain websites or apps that aren’t appropriate for their age. Further, you can limit their screen time with set limits or monitor their web activity.

Other than the features mentioned above, there isn’t much included in the software.

Let’s see what Malwarebytes offers in terms of features.

Malwarebytes does have a free version called Malwarebytes Free. However, the freeware can only remove infections from your computer and doesn’t offer real-time anti-malware monitoring and protection, so it’s not a good option for defending your computer against malware threats. However, if you have already been infected by some sort of malware, this tool can turn out to be useful.

Malwarebytes Premium for You (compatible with Windows, Mac, and Android) is the first paid antivirus package offered by the company. This suite offers superior malware protection against all kinds of threats, plus a safe web browser that allows you to surf and shop online with peace of mind and advanced ransomware protection.

The premium version also allows to schedule different scans around your schedule, rather than having to manually run each scan. You’ll also get automatic protection updates from Malwarebytes, so your computer will always be protected against all the latest digital threats.

A single license of this suite covers one device.

Malwarebytes Premium for You

Malwarebytes Premium for Home is another antivirus suite offered by the company. This suite has everything that the previous suite offers but gives you licenses for up to 10 devices. It’s an excellent pick for families who have several different devices running on different platforms and don’t want to get OS-specific protection for each one.

As a premium Malwarebytes customer, you can contact support 24/7 via email, online chat, or phone.

Winner: None. Both Windows Defender and Malwarebytes offer a few useful features as part of their software packages, but many advanced security-enhancing features and tools are missing from both companies’ offerings.

Malware defense is the most critical aspect of any security software. To see whether Windows Defender or Malwarebytes is better when it comes to anti-malware defense, let’s check out unbiased results from two well-known independent companies: AV-Test and AV-Comparatives.

The results of AV-Test’s recent two-round evaluations were released in April 2019. Windows Defender scored a perfect 6 out of 6 rating in the Protection category of these evaluations, exhibiting excellent anti-malware capabilities.

Malwarebytes scored a slightly lower 5.5 out of 6 in the same examinations, which is a good score but not perfect.

The experts at Austrian lab AV-Comparatives also conduct a similar study, called Real-World Protection test. Windows Defender got the second-best ADVANCED award in the recent Real-World test, while Malwarebytes – for some reason – didn’t participate in the evaluations.

Good antivirus software shouldn’t just defend you; it should run smoothly and allow you to enjoy your device without slowdowns. To that end, let’s check independent performance tests and see which of the two software puts the least impact on system performance.

In AV-Test’s Performance evaluation, Windows Defender didn’t quite get a perfect score, earning 5.5 out of 6. 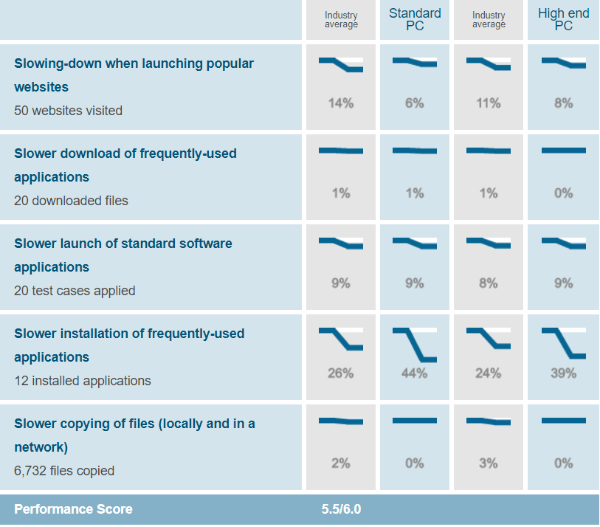 Malwarebytes also got a 5.5 out of 6, matching Windows Defender. 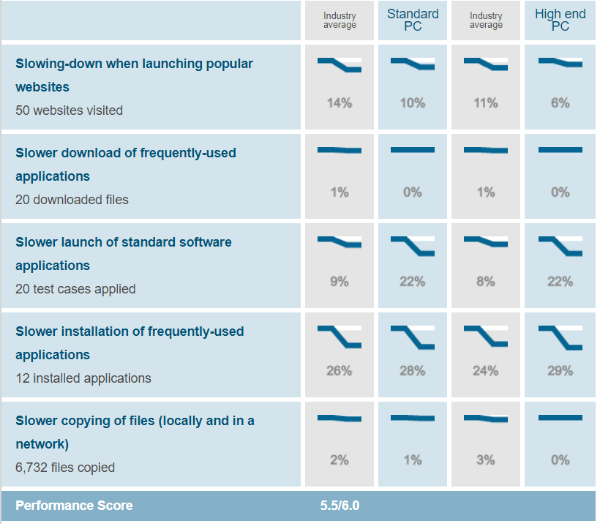 AV-Comparatives also has a Performance test of its own. The recent version of the test was conducted in April 2019. Microsoft’s product had a horrible time in this test; it came last in a trial that involved more than a dozen top security products. Malwarebytes, as said earlier, didn’t take part in the AV-Comparatives’ recent examinations. 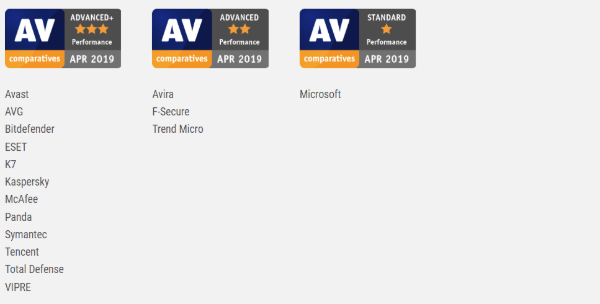 Winner: None. Overall, both software registered decent scores in the AV-Test examinations, but neither Windows Defender nor Malwarebytes performed well in the other evaluation.

Another important factor you can consider is how user-friendly and easy-to-use is the interface of a security software. This will ensure everyone can make use of all the features included in the software, even people who only have basic computer skills.

Let’s examine the interfaces of both Windows Defender and Malwarebytes.

Windows Defender’s dashboard, which is renamed as the Windows Security Center, takes a bit to get to. You have to go through several different clicks just to reach the dashboard. Once you’re on the software’s main window, you’ll see all of the major categories on the left-hand side of the screen. Each category is self-explanatory and contains several different features and options.

The biggest downside of the software is the lack of the ability to schedule scans. This means that any scan that the software performs should be manually initiated.

Overall, the interface is neat and intuitive but has some roadblocks to stop it from being truly great. 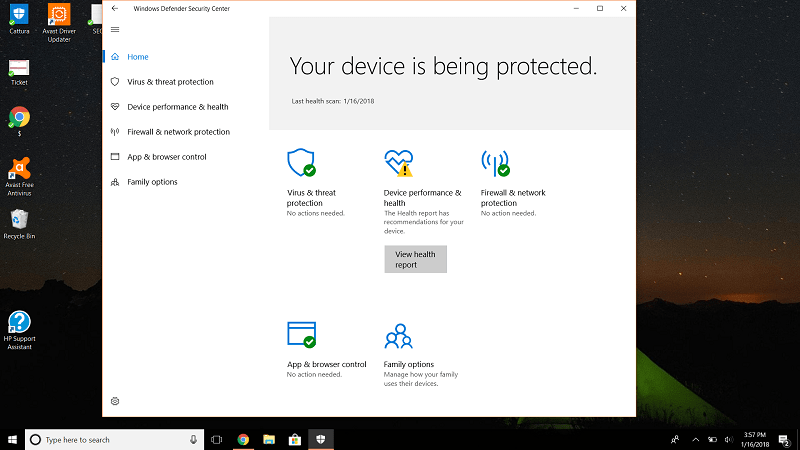 Now let’s examine Malwarebytes’ interface and see if they do a better job.

Malwarebytes has a crowded main screen that uses large icons and horizontal bars to provide you with all the essential information. The bars will light up and change color quickly if there’s an issue and return to normal color if everything is okay.

As usual, you’ll find different blocks on the left side of the screen, such as Scan and Settings. There’s also a Scan Now button on the screen that lets you initiate a scan with a single click.

The right of the main window shows the status of different protection modules, such as web protection, exploit protection, and ransomware protection, along with information about when that last scan was conducted and when the next scan is scheduled to run. 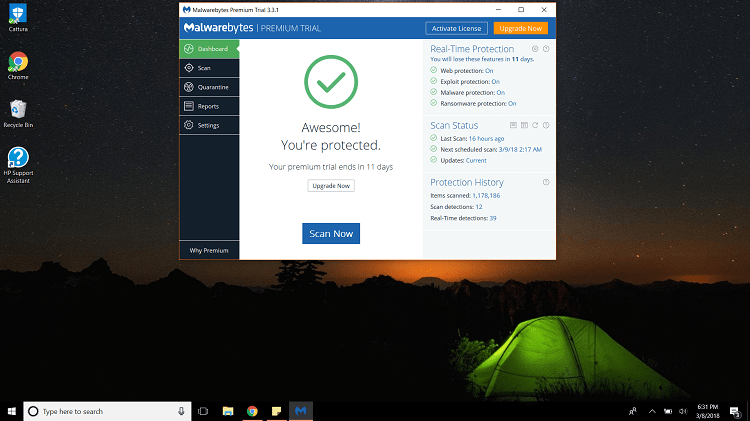 Winner: Malwarebytes. Overall, both software offer a decent interface, but Malwarebytes’ is more intuitive and easy-to-use than Windows Defender’s.

Winner: N/A. Since Windows Defender doesn’t offer a paid upgrade, there isn’t a real comparison to make between both software in this category.

Get Bitdefender at 60% off today

Our recommendations: After reviewing 50 antivirus suites from some of the biggest names in the cybersecurity realm, we believe that Bitdefender Total Security 2020 (currently at 60% off) is the best antivirus suite for 2020 in terms of value for money. You protect up to five devices (PCs, Macs, and smartphones) with a single license of this suite.
Got more than five internet-capable devices? We found that Bitdefender Family Pack 2020 is the best option out there in terms of value for money.
If you are still unsure, Bitdefender offers a 30-day money-back guarantee and exceptional customer support, so you there is nothing to lose.

Umair Anwar is an experienced freelance writer and founder of Proficient Blogging. He loves to conduct objective research and specializes in writing comprehensive software reviews and comparisons so people can make well-informed decisions. He usually talks about antivirus, VPN, online privacy, and other cybersecurity-related topics.

Get Bitdefender at 60% OFF

Don't rely on low-end, incomplete antivirus software when your security is at stake.

Protect yourself and your loved ones with the best antivirus software available. Act now to save an amazing 60% off the regular price.

Get your preferred antivirus at up to 70% off